This section allows you to view all posts made by this member. Note that you can only see posts made in areas you currently have access to.

May 22, 2022, 08:21:34 PM
Guys, after I shut down my laptop with the External SSD with exFat (2 Tb) plugged in, when I finished doing a backup via grsync I couldn't mount this device anymore. He tells me he couldn't ride. Then I ran the command:

So I don't know how to fix this. What amazes me is that in Windows 7 on a friend of mine's laptop it mounts and reads what's inside.
I'm using updated Linux Mint 20.3.
Ah, I also booted the Laptop with Ubuntu from another External HD (which is not SSD) and it managed to mount the External HD with the SSD.
It looks like the error is with Linux Mint installed on my laptop. Is it a problem in /etc/fstab or in another file that manages the mounts?
What do you suggest as an attempt to solve this? Should I reinstall Linux Mint 20.3 or another Linux distribution?
Thanks in advance for any help.
#2

January 05, 2022, 12:58:27 AM
I sent the following topic to the support of GitHub about the app KeepassXC:
I am a very often user of keepassxc and I can't find in configuration options how to increase the font size. The letters are foo small
I think that persons that have some visual deficiency have to use a magnifying glass to read the screen's information..

The GitHub support sent me the following answer:
We use the same font size that your system uses, or at least what Qt thinks is the system font size. You probably need to upscale the UI, try using one of these environment variables to properly scale the UI to your screen size (this is a notorious problem on Linux with Qt): https://doc.qt.io/qt-5/highdpi.html#high-dpi-support-in-qt

Well, I don't know what is UI and I don't know also how to set the environment variables.
Can you help me with a step by step procedure in order I can solve this problem?

April 02, 2021, 04:56:57 PM
Rich,
Thanks a lot to answered me about my doubt. I installed the baxex and it seems to me it was correctly. But when I clicked with mouse right button it opened in a way thet is not a common form as I read a Fiscal Note here in my Country: 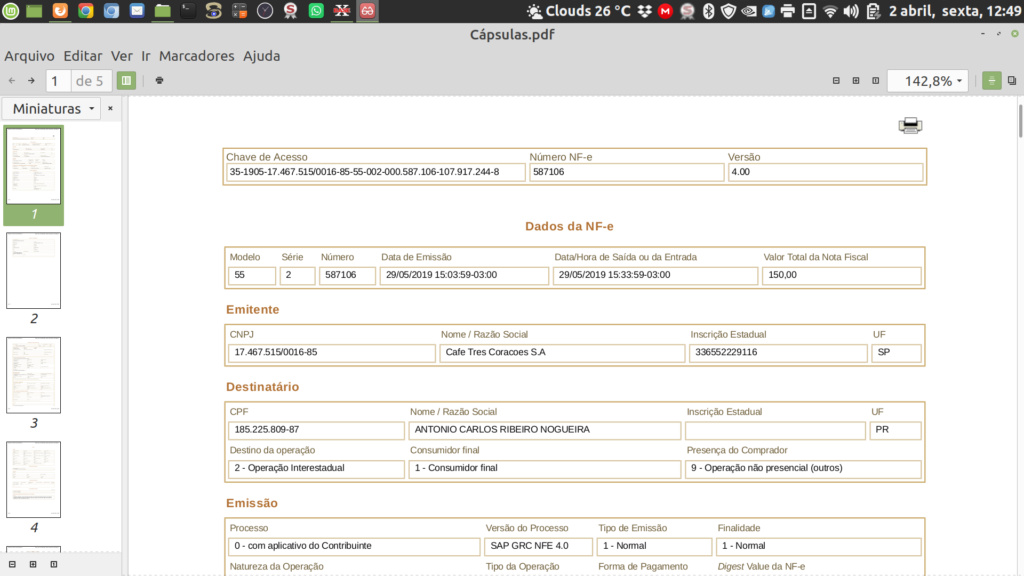 Perhaps I am not knowing how to use correctly the baxex appication. May you suggest me a tutorial in order a can use it correctly?
I beg your perdon for my poor English, but my native language is Portuguese.

March 30, 2021, 11:07:58 PM
Guys, I installed the viewer for .xml files downloaded from the IRS (the file is Viewer-7.6.6-Linux-x86_64-Install for 64bit Ubuntu) and the installation went well. Only when I'm running it gives an error and tells me to check the log file. I could not understand where the error is. It seems that the problem is with the eclipse. I am using Linux Mint.

May 21, 2020, 09:55:11 PM
Guys, I'm having a hard time using Rhytimbox when I'm going to "Rip" music CD tracks on Rhytimbox. The following message appears to me:
"Error downloading track
Could not open resource for writing
Close"
I am using an External CD Driver via USB and my Acer Nitro 5 Laptop runs Linux Mint 19.3.https://servimg.com/view/20047426/29
can anybody help me? Thank you in advance
#6

May 10, 2020, 08:13:54 PM
Taking advantage of the post, I would like to take the opportunity to ask if there is like in Google-Chrome, a way to mirror my noteook screen on the LG webOS LJ5550 TV. Using Google-Chromecast, in Google-Chrome I have the option to "Cast". I was wondering if in Firefox there is the possibility for me to do this, It seems that there is an option called "Fire TV", but I was not able to find out if this is a physical device (like Google-Chromecast) or an application that is installed on TV or Notebook. I installed a fx_cast Extension that after a few re-installs it worked properly and make me able to mirror the Firefox screen on the TV screen. But I would like to mirror the laptop screen in any situations.
#7

April 03, 2020, 03:00:04 AM
Ok, I liked Keith's answer and I'm also more relieved when Rich says that Firefox is a secure browser in order to access internet-bank. Therefore, as long as Google support does not solve the problem, I will start using Firefox as a browser to access my account at Banco do Brasil.
#9

March 30, 2020, 07:14:10 PM
1) I Installed via the google-chrome-stable_current_amd64.deb file downloaded from the Google website;
2) Because I bought the notebook with graphics cards to have a better screen resolution and I thought that Linux Mint would work well with the proprietary drivers, which would allow me a better screen resolution. But apparently, I spent extra money for nothing;
3) The drivers came with Linux Mint 19.3. I didn't install the Operating System. I paid a qualified technician to do the installation for me, since the boot was via UEFI and I was not getting it installed;
4) The problem occurred with the same kernell that was working before I boot with the proprietary drivers. I wonder  that the problem does not happen with Firefox browser which is working perfectly. It is a pity because I was using the Fifefox Browser to browse the various sites and using google-chrome exclusively for me to access my current account at Banco do Brasil;
5) I would like to post here the messages that are returned when I start google-chrome via console, but the messages are sparse and would take up a lot of space to be posted here;
6) I am also wondering that a log file is not created in /var/log even if I start google-chrome with the command: "google-chrome-stable --enable-logging = stderr --v = 1";
7) I also tried to create an output file using the command "google-chrome-stable> saida.txt" and it is created but is empty.

How do I boot without using proprietary drivers (boot without UEFI I imagine)?;
9) Or I have to accept to use Firefox even to access my Banco do Brasil account for a while until a solution appears, even why I already posted this problem in the Google community.
#10

Linux Support / Google-Chrome blinks and after that closes abruptly.

March 25, 2020, 01:55:13 AM
Guys, I installed Google-Chrome in my notebook and while I was not booting with proprietary drivers, Google-Chrome was working fine. After I chose to use the proprietary drivers from Nvidia (Nvidia Performance Mode) or Intel (Intel Power Saving), Google-Chrome suddenly blinks the screen and then closes abruptly. This does not happen with Firefox browser. Would someone have a suggestion to offer me?
https://servimg.com/view/20047426/8
#11

Linux Tips & Tricks / Re: Size of the letters of "date" in the right corner up panel in Linux Mint 19.3

Linux Tips & Tricks / Size of the letters of "date" in the right corner up panel in Linux Mint 19.3

Linux Support / Changing the Ownner of a Partition

January 09, 2020, 12:38:14 AM
Guys, I installed Linux Mint 19.2 in my laptop and when installing, as the hard drive was 1tb, I split it in two partitions and created it in addition to the /  /home and swap partitions, and created a /windows partition (fat 32). It turns out that the partition owner is root and I would like to create directories in this partition for /home users. I tried via console, as root user, changing the /windows partition group to the user group. But it did not permitted. The group name of this /windows partition is plugdev. I tried the command chmod 777 /windows but it didn't work out also. it left rwx for the owner and the group (plugdev), but did not authorize anything for "others"; Could someone help me how to change the group of this partition /windows?
May I simply delete this /windows partition using "gparted" without changing anything in /etc/fstab? What should I change there to delete /windows?
I bag your pardon for my poor English, but my native language is Portuguese. Thanks in advance.
#14